Jared Harris is a mechanical engineer by profession and an avid cellist. After working in a job that involved a lot of steel enclosures and sheet metal, in 2019 Harris was inspired to use this material to build a cello.

Long before his decision to make a cello out of steel, he had a new concept for his design. He wanted to modify the standard cello construction to take advantage of the properties of this new cello-making material.

He took a week off from work to make his cello, but actually put in about 70 hours to complete the project.  He bought his own welder and got sheets of metal in different thicknesses from a local recycling company.

He hammered out the shape of the body by hand. The neck took the most time, because he had to bend everything by hand and hammer.

His biggest challenge was the movement of the metal when welding. Because he did everything by hand rather than with a machine, there was some variation in the way the metal moved.

The final cello  is about 6% larger than a standard full-size cello, and it weighs roughly twice as much.

It has no bass bar, but instead has what he described as a rib that runs from the top to the bottom block on the inside of the belly. He explained that steel does not require the extra support of the bass bar. In order to avoid restricting the sound, he used this rib instead.

The f-holes are his own design.

The cello is substantially louder than a wooden cello.

Everything on the cello except the 3D printed bridge and nut are made of steel.

The heel is hollow and open at the back with no button covering the end.

He used precision bass tuners and created a hook design instead of a scroll. This is useful for hanging the cello from something or hanging something from the cello.

Here is a Q&A session that he filmed for The Cello Museum. He has included many more details and an entire tour of the cello. (Thank you, Jared!)

Jared has a number of videos on his YouTube channel, Uncontained Curiosity. Here is one of his videos that compares the sound of a standard cello with his steel cello.

For more information or to contact Jared  about commissioning a handmade steel cello, please email him at uncontainedcuriosity(at)gmail.com, or visit his YouTube channel, Uncontained Curiosity.

cello, steel
About the artist 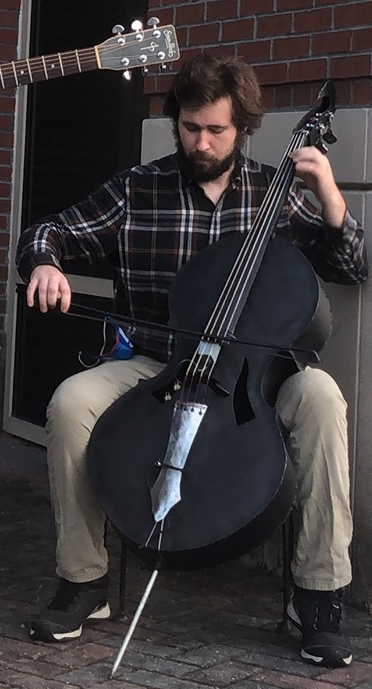 I've grown up always working with my hands or doing some sort of DIY activity. This ranges from electronics, to auto-mechanical work, computers, and of course music.

At first I always wanted to be a luthier since I would always tinker with my instruments, but as I grew up - I pursued Mechanical Engineering. First example was re-tuning our piano while I was in middle school!

I've played piano most of my life going on 20+ years, Cello for 15 years, then guitar/bass (mostly electric) for 12 years.

I've always done my own modifications to my electric guitars such as changing out pickups, wiring modifications, among other details.

For cello, I learned to fit my own bridge and from there after I got into 3D printing, I started experimenting with alternative bridge designs.

Throughout my college years I always had this idea for a new cello design. I went as far as creating 3D CAD models and also hand sketches (most have been lost).

When I eventually got myself a welder, the steel cello was my very first full project. I can't say it's the prettiest welds, but as for absolute functionality, it's more than I could ever ask for.

As of lately, I'm working as a mechanical engineer professionally, and at home I'm always tinkering on my next project, which I'll usually share on my YouTube channel: Uncontained Curiosity.

For more information or to contact Jared  about commissioning a handmade steel cello, please email him at uncontainedcuriosity(at)gmail.com, or visit his YouTube channel, Uncontained Curiosity.

Your ticket for the: Steel Cello by Jared Harris – Uncontained Curiosity