Love Bridgerton? Love the Cello? Add This to Your Summer Reading List

30 June 2021
No comments yet
Articles, Cellos in Fiction


Love Bridgerton? Love the cello? Here’s a book – possibly a whole series! – to add to your summer reading list.

Amid all the balls and social occasions in the Bridgerton books and Netflix series, there are the obligatory musicales. The Bridgerton books in particular have a running joke about the terrible music-making of the Smythe-Smith family.

Interestingly, Julie Pottinger, better known by her pen name, Julia Quinn, has actually written a quartet starring the infamous Smythe-Smiths themselves. The fourth book in this series tells the story of Iris Smythe-Smith, a young woman who plays the cello.

Discovering this book was what my high school calculus teacher would have called a “happy accident.”

Before the pandemic, I often visited my local library to search for fiction with cellos and cellists. One day, the librarian helping me got a ridiculously happy grin on his face. He’d found a book in the catalog that he thought I’d love.

It was set in the 19th century with the main character who played the cello. Perfect!…or so I thought. At first, I couldn’t find it, because the shelf my librarian sent me to was full of romance novels. Then it struck me – the cello book WAS a romance novel. A cello in a romance novel?!? The librarian was as surprised as I was and looked sheepish when I showed him the book. Although it’s not a genre I often read, I decided it might be an entertaining beach novel, so I added it to my pile to take on vacation.

This novel is the fourth book in the Smythe-Smith Quartet by the award-winning writer, Julia Quinn: The Secrets of Sir Richard Kenworthy.

She Used Her Cello to Catch a Husband

Our cellist in the novel is the main character, Iris Smythe-Smith. At the opening of the book, she and her female relatives (sisters and cousins) are playing a private house concert to attract the attentions of eligible young men.

Winston Bevelstoke has been invited to the concert, and asks his friend, Sir Richard Kenworthy, to accompany him. One of the first things Sir Richard notices is the cello:

Richard nodded slowly, his eyes settling on the cello, resting against its stand. It also looked expensive, although it wasn’t as if he knew anything about the manufacture of cellos.

I actually wish we had more information in the book about her cello. It’s exciting to think of Iris Smythe-Smith having an instrument made in London about that time.

She might be playing a cello from one of the London families of makers, such as the Furbers, the Panormos, the Betts, the Dodds, the Forsters, or the Hills… to name just a few.

You can see three English church cellos from this period in our current exhibition:

These church instruments mimicked concert cellos of the time like the one Iris would have played in the novel. However, although they were made and used with love, they were not what we would consider to be concert instruments.

Maybe you are imagining a talented family of musicians carrying their audience away on waves of beautiful music – like a concert by the amazing Kanneh-Masons. If so, you’d be wrong. Very wrong. Needing-ear-protection-and-a-stiff-drink wrong.

Sir Richard is surprised by his friend Winston before the music begins.

Richard stared at him as if he’d gone mad.

“For your ears,” Winston clarified. “Trust me.”

“In this,” Winston said, stuffing his own ears with cotton, “I do not exaggerate.”

Richard glanced discreetly about the room. Winston was making no effort to hide his actions; surely it was considered rude to block one’s ears at a concert. But very few people seemed to notice him, and those who did wore expressions of envy, not censure.

Later in this pre-concert conversation, when Winston shows Sir Richard a metal flask in his pocket,

Richard’s eyes widened. He was no prig, but even he knew better than to drink openly at a musical performance given by teenaged girls.

And then it began.

After a minute, Richard found himself adjusting the cotton in his ears. By the end of the first movement, he could feel a vein twitching painfully in his brow. But it was when they reached a violin solo that the true gravity of his situation sank in.

“The flask,” he nearly gasped.

To his credit, Winston didn’t even smirk.

Winston’s protective measures had been justified.

As the concert progresses, Sir Richard discovers that Iris can play the cello. If the rest of the group had had her skills, the cotton and emergency flask would not have been necessary. Sir Richard

found himself fascinated by her, this small woman trying to hide behind a large cello. She at least, knew how terrible they were. Her misery was acute, palpable. Every time she reached a pause in the score, she seemed to fold in on herself, as if she could squeeze down to nothingness and disappear with a “pop!”

After the concert, Iris tries to get away, but Sir Richard is able to speak with her briefly before she makes her exit.

The day after the concert, Sir Richard pays Iris a visit. By the end of this second meeting, he has made the decision to marry her. But what does Iris want?

I won’t give any spoilers here – just a warning. The book is generally quite PG (if not G) except for two sections, which are far more detailed and explicit than I (as a newbie to the romance genre) expected. If you are an Outlander fan, these scenes are not as intense, but in this book, they seemed a bit out of place, moving from PG or even G straight to NC-17 or X.

You can read an excerpt of the book here. The Secrets of Sir Richard Kenworthy is the fourth novel in The Smythe-Smith Quartet, subtitled: “The world’s worst amateur musicians finally take center stage.”

What?!? How can ANYone not like the cello, particularly someone who can play it? As I continued reading about the lives of these characters, the cello did not make another appearance. Toward the end of the book, Iris says

“I don’t [have to play the cello] anymore. I don’t have to now that I’m married . . . I really do hate playing the cello, though. You could set me down in an orchestra of the finest virtuosos – not that they’d ever allow a woman to play – and I’d still hate it.”

After reading this, I didn’t like Iris as much as before. Though it seems Iris had other ideas, I had actually thought that the country house she’s in for much of the book, Maycliffe Park, would be a lovely place to both practice and have house concerts. Quinn based Maycliffe Park on Norton Conyers House & Gardens. I love that Quinn gives her readers a soundtrack for this novel. When I saw the link to it, I expected pieces by Mozart and other composers that Iris and her family might have played in their concerts. I was surprised that this was not the case, but I enjoyed reading the author’s comments on each song. Check out her list here. Listen on YouTube here.

However, the soundtrack for the Netflix series did include cello music. One piece is Peter Gregson’s track Cello Suite No. 6 in D Major, BWV 1007: VI. Gigue from his 2018 album Bach: The Cello Suites Recomposed

Of all of the covers for this book, my favorite is the Indonesian version (guess why): 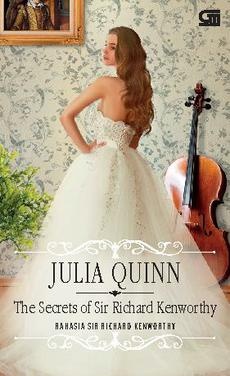 If you are not a fan of romance novels, I doubt this one will make you a convert. If you love romance novels and cellos, this book is for you. My take? I’m glad I read it, just to find out why a cello was in a romance novel. However, keep in mind I’m cello-obsessed.

One point the novel does raise: should we force our kids to play an instrument they don’t like? Will this lead to adults who enjoy playing music? This is another, weightier, topic for another time. What is your favorite work of cello fiction? Have you ever found a cello in a romance novel? Let us know in the comments.

Some links on this page are affiliate links. Please see the footer for more information. Thank you for your support.

Your ticket for: Love Bridgerton? Love the Cello? Add This to Your Summer Reading List

Love Bridgerton? Love the Cello? Add This to Your Summer Reading List