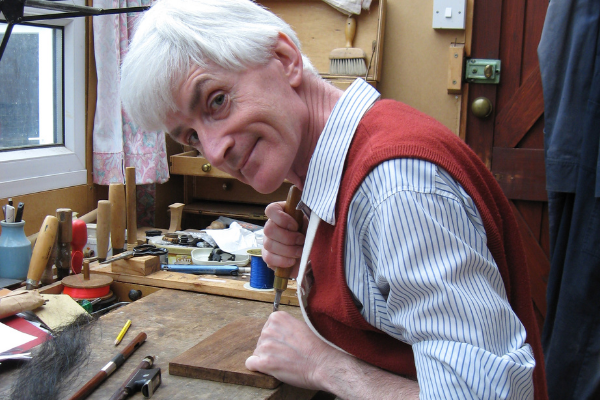 Andrew was born in Bournemouth (Dorset, UK). He started playing the violin at age seven, changing to the viola at fifteen when the length of his arms and the gap in the school orchestra demanded it! A good teacher, along with places in both the Hampshire and Dorset Youth Orchestras, ensured his musical future. Originally intending to study engineering, an appendicitis operation just before his A-level exams meant an opportunity to reconsider. He gained a place at what was then the Birmingham School of Music to study the viola with John Brearley and John White, as well as conducting with Harold Gray.

The need for a good instrument of manageable size (and low student finances) led Andrew to consider constructing his own. Model-making experience helped, as well as books on the subject and David Evans’ luthier’s supply shop. Birmingham was thus the first venue to be shocked by one of Andrew’s trapezoidal-bodied violas even though it was from a design first published in 1819. A student colleague joked that, without a bow, the homemade outfit was incomplete. But, the hint was taken and work started the following week. Expert advice from Arthur Bultitude, who was the finest bow maker in England at the time, helped remedy the shortcomings of that first bow. Andrew then realized that making new bows and studying old ones represented an ideal compromise between engineering and music. During his last year at Birmingham, his interest in a career as an orchestral violist waned as his bow making flourished. With the help of his parents, Andrew set up his own business back in Bournemouth in 1980. In 1990, he began teaching courses in bow maintenance and, later, bow making at the Faculty of Music, Oxford that houses the Bate Collection. That collection contains some truly fine bows as well as an exhibit of a complete bow maker’s workshop, the contents belonging to William Retford (who taught Arthur Bultitude).

When not making or repairing bows, Andrew often has the chance to play his viola in both choral society orchestras and chamber music ensembles, including viola and piano recitals. For alternative relaxation, he travels the countryside of Dorset by riding one of his patiently restored 1950’s lightweight cycles.

Your ticket for: Andrew Bellis