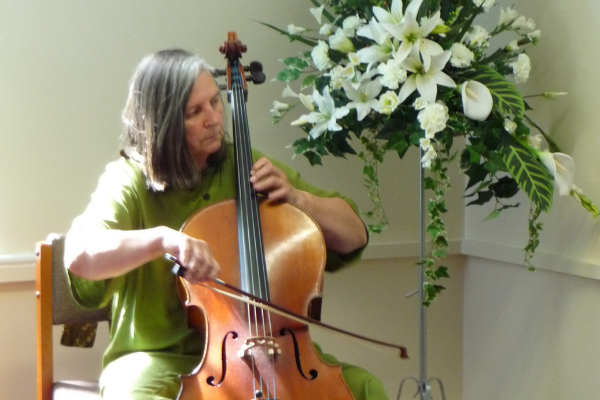 Born the middle daughter of three, to parents who were superb amateur musicians, Gill began playing the cello at five years old. At ten she was awarded an exhibition to the Junior Department of the Royal College of Music in London, where she studied weekly for 9 years. At that time she was being encouraged to become a professional cellist, but her heart was already in cello teaching- a little of which she’d done since she was 13. She had also taken over as peripatetic cello teacher for the area of London where she was schooled in her final school years.

So she fought against going to full-time college and instead trained as a teacher. After some years teaching all ages in Music, English, and general subjects in English schools, she became a peripatetic cello teacher once more in the very rural county of Wales where her family had moved. She taught pupils from four years old to nineteen in schools and wrote cello tutors for them using the nursery rhymes and folk tunes they were familiar with in this Welsh-speaking area. She also arranged Welsh folk songs for the Junior and intermediate String Orchestras there.

After retiring she did some private cello teaching and began writing, too, both words and music. Her collection of illustrated short stories about and for cellists has been published, and the Cello Museum is planning to publish its second edition, plus the audiobook, to which many cellists on Facebook cello forums contributed during the pandemic. Lately, she has turned her hand to producing books of cello tunes, both regional ones, and other themed collections for learners and for cello ensembles.

Your ticket for: Gill Tennant